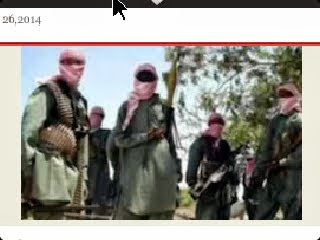 Words failed me! Shortly after my last post, I heard the News of the ‘Yobe Massacre’ and a heavy cloud of sadness descended on my soul. It is with a heavy heart I bring you this public statement by the Chairman of the NATIONAL Human Rights Commission.

There is no way to minimize the shock and tragedy of these events. The perpetrators clearly do not wish Nigeria well. Words are not enough to condemn them and their conduct. To the parents of the affected children, words are equally insufficient comfort or condolence. This is every parent’s worst nightmare. Condolences are also due to the Government and People of Yobe State and to the Federal Government.
Education a basic right guaranteed in the Universal Declaration of Human Rights, the African Charter on Human and Peoples’ Rights, and the Constitution of the Federal Republic of Nigeria. These children were killed in exercise of this right. The pursuit of education cannot be cause for the mass murder of innocent children.
FGC Buni-Yadi is one of a network of 104 so-called Unity Schools, begun in 1966 by the Federal Government and accelerated in the 1970s to foster national unity in Nigeria through learning and enlightenment. It truly hurts that children whom we sent to school as symbols of our unity as a country have become sacrificial offerings in some people’s project towards dis-unity. This must not be allowed.
Confronting this requires collective leadership at all levels. At a time like this, it is necessary for political leaders across parties to sink differences, reassure the country, and discover in adversity such as this the will to forge common purpose.
Symbolisms do matter. In memory of these children and all others lost in the ongoing situation in the north-east and as the institution of government closest to the people, our National Assembly should re-convene urgently in plenary. The plans for the Centenary celebration must reflect the tragic backdrop of the country at this time. A suitable period of national mourning will not be out of place. In the interim, proposals for the transfer of children in the eight Unity Schools in Adamawa, Borno and Yobe States to other schools outside the region should be taken seriously.
Many official reports, including the Marshall Dike report (2009); Galtimari Report (2011); and Turaki Committee Report (2013) already contain far-reaching proposals for addressing the situation in N.E. Nigeria. The Federal Government and the governments and people of the states in the Lake Chad area in N.E. Nigeria deserve the support and ideas of all citizens, well-wishers and friends of Nigeria as they work to bring an end to these atrocities. (END)

I am absolutely in support of the proposal made about transferring other children in the eight Unity Schools in Adamawa, Borno and Yobe States to other schools outside the region. This should be taken seriously by our government. Not only this, the Corp members, (NYSC) should also be transferred to prevent their lives being cut down in the prime of their youth!

May God indeed comfort the hearts of all affected! This is a wake up call that the arms of flesh will fail! Let’s ask for God’s mercy upon our nation! Words fail me!
Till my next post…
If my people, which are called by my name, shall humble themselves, and pray, and seek my face, and turn from their wicked ways; then will I hear from heaven, and will forgive their sin, and will heal their land.
http://bible.us/2Chr7.14.KJV.