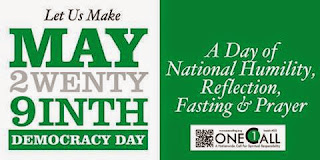 Hi friends! Yea and yea! Its been a while! To be sincere the state of our nation just got to me. Its so depressing and so disheartening! But glory be to God BECAUSE we have Jesus! We would have been a hopeless nation without HIM.Today is the 15th anniversary of our Democracy Day. Considering the state of our nation especially as we still wait on our Government to #BringBackOurGirlsAlive and with God's help #EndBokoHaram, the usual festivities are not to be.However, I woke up this morning to read such an inspiring write-up and I just decided, 'this is definitely a must share!' So read on! Written by Oluwabamike Fadipe. @BankySanya I'm awed by the countless comments I've heard in the last few days about several people's opinion about our dear country and blessed nation. From sighs to comments of hopelessness, I've heard comments that I wish we're not uttered at all because I understand the power of the spoken word, especially when such words have now become songs sung by all, it then becomes a thunderous declaration!
The state of the nation is increasingly worrisome from inactivity of leadership, insincerity of governance, unaccountability, mediocrity, insecured government that will rather harass an innocent protest but refuse to bark at the roaring insurgents….I'm sure the list still continues and probably endless. My worry is not just because of these increasing happenings and unfolding events that we are seeing but more of significance the fact that the people ~ Christians who are supposed to stand on the rampart and watch what God will tell them about the situation, to stand, bridge the gap and build the broken down walls of Nigeria are the ones railing Lamentation.
I agree with protest when it's necessary, constructive voices not negative voices that the enemy and the territorial spirits have to hold on to as a strong reason! It is altogether a battle! The earlier we see it as such, the better for us. it's a battle for the soul of our seed! Our physical seed in our children, our seed of faith and our seed of hope in our country! While we need to take the battle to the gate and stretch forth a request to the king like Esther did, we also need to stand in the stead of prayers and wage war against our real enemy. Americans, old and young rise up everyday and declare blessing on their country. We raise up lamentation against our country, speaking negative words, those words go upwards and hover over the nation and come back as seed and starts germinating.
To men and women who have taken the battles to the gates, making demands and holding the government accountable, I speak grace, grace and grace and I pray God reward you immensely and preserve you to see the good of this land.
Even if the army and police have become helpless concerning the insurgents, the Lord's hand is not shortened that it cannot save. The Lords right hand of deliverance is raised on high. Faith in Nigeria can never be based on what is working well or on what eyes can see! What faith really is, is calling those things that are not as though they are and may the enemies of Nigeria be confounded and forever troubled (Psalm 83).
This write up is solely the authors opinion, I expect criticisms on being too spiritual or skewed, I'll definitely take all in my stride but I know for sure, the things we see are more than the things we don't see. If science and technology could make waves to travel from one continent across seas and oceans to another continent and convert to sound and voice that we hear on our cell phones, then be assured that this whole world and indeed our country is controlled by created forces and uncreated ones.
"The Lord will rid Nigeria of strange children.
That our sons may be as plants grown up in their youth; that our daughters may be as corner stones, polished after the similitude of a palace: That our garners may be full, affording all manner of store: that our sheep may bring forth thousands and ten thousands in our streets: That our oxen may be strong to labour; that there be no breaking in, nor going out; that there be no complaining in our streets. Happy is that people, that is in such a case: yea, happy is that people, whose God is the Lord. (Psalms 144:12-15 KJV).Hmmm. Friends, indeed we can all do more and better as relate to our actions and utterances! Our God will #SaveNigeria! He will #BringBackOurGirlsAlive! He is more than able to #EndBokoHaram! But let's change our confessions! Let's change our confessions regarding our Government, our nation and our #ChibokGirls.
#OurGirlsAreOnTheirWay
#GodWillSaveNigeria
#NigeriaNotaFailedNation
#NoMoreBokoHaramTill my next post…let's continue to take the battle to the gate physically but more importantly spiritually. Let's continue to STAND!