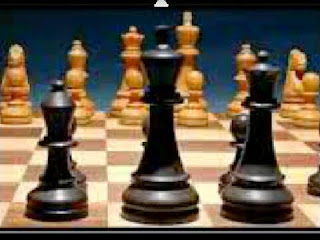 Life is like a game of chess.
To win you have to make a move.
Knowing which move to make comes with IN-SIGHT and knowledge, and by learning the lessons that are accumulated along the way. We become each and every piece within the game called life!(Taken from "The Master's Sacred Knowledge")Hmmm. I came across the above quote sometimes ago and by God, don't I know it! Life is indeed a game! And you will be on top of your game if you make God the source of your IN-SIGHT! And be sure to MAKE THAT MOVE! Hello everyone! How has it been? Hope we remain resolute in our appeal for our Government in Nigeria and any/every one who can make #BringBacksOurGirls happen? Let's keep hoping against hope for their safety. #OurGirlsAreOnTheirWayTo continue in our series of #ReadRestRelax, I am posting the Chapter 3 of #SecretAnguish. I pray you are as blessed reading it as I was writing it!.CHAPTER THREEShe heard the hooting of the horn and knew that Steve was back. She went out to open the iron wrought gate that led to the compound. The house was a detached duplex with a narrow drive way and a wide lawn where they usually have a mini picnic whenever they were at home. It was 9pm.Steve parked the car and took his jacket from the back seat. Mary came to help with his laptop bag and noticed the passenger seat has been adjusted to leave a greater leg-space. She presumed he just dropped someone off, probably Tina.
"Hello dear, how was the office?" She said in a forced voice. She was ready to erupt.Steve was surprised. Usually, she rushed out to open the gate and rushed back in before he parked the car. And even that only happened if the maid was not around. He was sure something was amiss and was not in the mood for her irritating, nagging, fault–finding ways that night.Thank God the children are not around. It was not entirely necessary for him to go to the office today but he just couldn't imagine himself coop up in the house with her all day. Since he knew Tina would also be at the office he had decided to go as well. He would rather be somewhere he was sure of feeling good about himself than be where the only thing he was sure of was problems upon problems.He did not know exactly what the problem was with Mary. What he knew, deep down within him was that he wasn't happy with things at home. He has noticed that everything about her irritate and displeased and irritate the hell out of him. Thanks goodness for Tina. He knew he was somehow substituting his affection for his wife for Tina's but he didn't know what to do. She was like a balm to his bruised ego. She look to him for advice and what he has to say always count for something with her. Whenever he was with her, he felt on top of things like he has no care in the world .He was able to think, plan and make effort to get out of the spiritual rot he was in. At home, he felt choked.He found he sought her out more often. She was sure to encourage him. His thirst and hunger for God were slowly but steadily being rekindled and all thanks to her. He would never cease to bless the day he met her. She is a real jewel, a gem. That Tade guy was very lucky to have her love. H e never cease to feel a pang of jealousy whenever he thought about the guy."Your food is ready."
Mary's voice brought him back to the present. He was visibly startled.
"Oh ,thanks." He walked straight to the living room with Mary right on his heels.
"Penny for your thoughts? You were lost there for a moment. What were you thinking about?"
"Nothing really."
All he wanted was to take a shower to take a shower and go to bed. He has eaten his fill at Prof. Daniels' naming ceremony of his new baby. He felt a little guilty that he did not inform Mary about this as Mrs. Daniels asked of her. I t was really an oversight but maybe subconsciously he didn't feel like going with her. He thought it a little late telling her now; she would throw a tantrum and make a mountain out of a molehill.Steve was obviously not here. Mary thought. His thoughts were still on his latest sweetheart, probably Tina.
Right on cue, she launched the first missile.
"Would that 'nothing really' has anything to do with this?"
She extended her hand displaying the damning letter. Her nostrils flared and she was shaking with anger.He could not just imagine what this was all about. He was not interested and did not want to be drawn into any verbal argument. He made no attempt to take the crumpled paper from her.
"Here, let me help you," was her sarcastic response as she straightened the letter and proceeded to read.
"She is my friend, my confidant………………….my hope ,and my inspiration. I don't know what I will do without her…………."To be continued!Want to know what happened next? Do look out for my next post! Till then, let's continue to offer fervent heartfelt prayers for our nation, Nigeria and especially for the Abducted Girls!