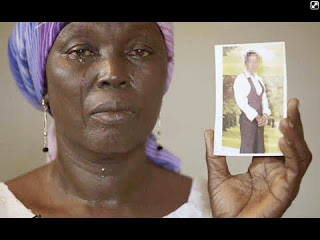 Hello everyone! Hope we are doing good? Hope our week has not been too hectic? Not to worry, THANK GOD IT'S FRIDAY! And let's bless God for the opportunity of seeing another month; the month of June.
Some were not so lucky! At least, not in this nation of mine, Nigeria!Early this week, I had a terrible nightmare that woke me in the middle of the night. I decided to write it down. It came in form of a poem, sort of! And since I don't usually 'do' poem, I forwarded it to a friend of mine, IFY OMENI.She is a graduate of English with Masters in Media and Communication, Pan Atlantic University. She has authored 3 books: Letter to Thilda, Pearls are not for Pigs and Footprints of Note. She is also the Chief Ideas Officer, Touch of Gold Media Limited. You can contact her on 08147201075. She made the necessary 'minor' corrections as she called it, to my 'nightmare-turned write-up'. Please read on. It's straight from my heart!
I woke up in cold sweat
Goose pimples all over my body
My heart's palpitation erratic
Confusion, alarm and fear
Were emotions that struck me
I tried to grasp what was amiss
Trying so hard to remember
Then I did.

I just had a nightmare
A terrible, horrible and horrific one
My child was missing!
I imagine him out there
With all the prevalent horrors
Madmen and women
Paedophiles that prey on little ones
Kidnappers, drug addicts and the likesI can only imagine
Or rather, I can't even imagine
How this could have happened
My pen shook as I tried to put
My nightmare into words
How could this be?
How could he be lost?
What exactly happened?

My heart and brain had gone blank
A great sense of loss enveloped me
I wondered if he would ever be found
Then I remembered; it was indeed
A terrible nightmare
I went to his room to assure myself
That he was still very much with us
And I saw that indeed he was

Then I can only imagine
Or rather I can't begin to imagine
How they are feeling right now
The parents of the #Chibok Girls
How are they coping with the loss?
Some have not just one but two daughters
In the Chibok school
Some have not just daughters but nieces as well
Precious jewels each and everyone of them

The arm of flesh has failed
Conflicting opinions and advice
Counsels of Ahithophel abound
Some trust in chariots
Others in weapons of war
But we trust in the name of our Lord
Because He alone is able
To #Bring Back Our GirlsYours sincerely,
KEMI ODUTAYO
@kemi_odutayo