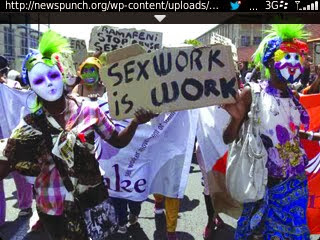 Hello! Are you aware that today March 3rd, 2014 is the 14th International Sex Worker’s Rights Day? I must tell you, I was shocked to my bones when I read this online! http://newspunch.org/?p=4120
I quickly did a google search and guess what I found? A particular article got my attention; see an excerpt below.
‘In 2001 over 25,000 sex workers gathered in India for a sex worker festival organized by the Durbar Mahila Samanwaya Committee (or DMSC), a Calcutta based group whose membership consists of 65,000 sex workers. As a result of this convening and with a desire to acknowledge the collective power of sex workers’ communities, the DMSC proposed that sex workers of all genders and their allies observe March 3rd as “Sex Workers Rights Day.” Since the early 2000s sex workers around the world have celebrated International Sex Worker Rights Day with cultural events, public demonstrations, community pot lucks, and the release of reports about rights.

The DMSC has continued to host ground-breaking festivals, such as the Festival of Pleasure in 2007, and to produce and be the subject of films about the struggles and experiences of sex workers…”
Hmmm. But should this be a surprise? It shouldn’t really! The surprise was Nigerians Sex workers too, protesting against discrimination. Coming out with all boldness to demand for legal recognition of their trade as a job!
We are really in a dispensation of massive impunity in our nation. A time anyone and everyone do as they like! They are now going as far as demanding that these anomalies be legalised.
In the Punch article, I read that, ‘Some of the prostitutes told P.M.NEWS that the time had come for the Nigerian government to grant them their due recognition and further recognise that as human beings trying to keep body and soul going, the ‘profession’ should be considered legitimate enough to put a stop to its discrimination and stigmatisation.
‘Though many of them did not realise that a day like this was set aside for them until they were told, they also called on rights activists to assist them gain the desired recognition.’ End of quote.
To what length will our ‘Rights Activists’ go in their activitism? Would they rise up to the call of these sex workers and condone their actions(buz)? Would they use the same rationale and arguments they used to justified homosexuality? (Check out my posts on HOMOSEXUALITY http://bit.ly/1hGI2v5 & http://bit.ly/1i2kkcp). Would they say again that prostitution is also ‘sex between two consenting adults’ and so should be legalised?
Our values are being flushed down the drain by our blind insistence to follow the western world! Hook, line and sinker, we are turning a blind eye to our culture and sense of morality. More importantly, we are rejecting God’s injunction of chastity! The good book says, ‘Your body is the temple of God!’ How come we now feel we can do anything we like with this same body?
The marriage institution is being attacked from different directions! The whole essence of relationship, especially between a male and a female is being distorted! May God have mercy on our nation, Nigeria and the world as a whole!
This post is not to bash the sex workers but certainly to condemn Prostitution! Granted, several ladies and indeed some men have reasons they find themselves in this situation. However, no matter the reason(s), prostitution is one of the horrible forms of degradation of a human being! And the earlier they realise this, the earlier they will be more receptive to receive help via rehabilitation.
Till my next post…follow me on twitter @kemi_odutayo