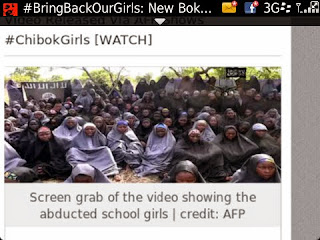 Hmmm. It is imperative that we believe that its possible for us to have our girls back ALIVE! Amidst all the conspiracies, blame trading, misinformation, feet dragging, inhuman utterances by some etc surrounding the 276 girls abducted from their school on April 14 in my nation, Nigeria, we need to keep hoping that we will see them again!Hi, everyone! The featured picture is a screen grab from the video released by the Boko Haram sect in which they declared their intention to use #ChibokGirls as bargaining chips. They want their 'brethren' that are incarcerated in our prisons released in exchange for these girls. What gall! I can't just imagine the pain and anxiety of parents as they played this video over and over again trying to see if their own daughter is part of the 136 girls in the video. 276 girls were allegedly confirmed abducted and 136 were shown in the video so…where are the others?May God comfort their parents, uphold the girls and give our Government wisdom to make the Boko Haram Sect and atrocities things of the past! Let's hold on to our confession of faith and continue to declare that despite every News/Information to the contrary, #OurGirlsAreOnTheirWay.Hmmm. It is well with our nation, Nigeria! Meanwhile, #ReadRestRelax as I continue with Chapter 4 of #SecretAnguish.CHAPTER FOUR Mary lurched upright in the dark of the night and clutched the sheets to her chest, her hand to her throat. Her breath came in harsh grasps, and her heart jerked painfully in her chest. She scooted back against the headboard and wrapped her arms around her upraised knees. She rocked back and forth.She remembered she had cried herself to sleep. She glanced at the clock on the bedside table; it was 2pm.Lying on the table beside the clock, amidst used tissue papers and wet hankerchiefs, was the rumpled letter that was the genesis of yesterday's fiasco. She also noticed that the other side of the bed has not been slept in. She wondered where Steve was.As memories flooded her mind, she swallowed against the raw pain in her throat. Betrayal and humiliation flooded through her in equal measure. In retrospect, her reaction and the way she had handled the whole issues left a lot to be desired, no matter how she tried to justify her reaction. She felt ashamed of herself.Instead of responding to the situation, she has reacted, forgetting that a soft answer turns away wrath. Her mind was not at peace; a terrible nightmare must have woken her. As her heartbeat slowly eased from its frantic thumping, she breathed deeply through her nose and listened to the whir and click of the ceiling fan. She did everything but think of the ramifications of this latest debacle on their home.She now realized that there is a big difference between knowing the right thing and actually doing it. Being one of the marriage councillors in your church give you no absolute guarantee that you won't have marital challenges as well. But one would expect that the way someone with knowledge will react would certainly differ from that of the ignorant about such matters. Obviously, knowledge alone is not enough. She knew that with a man, nagging, criticizing and sometimes, plain talking doesn't accomplish much. Prayer is the only thing that always works; and sometimes anything you say will only hinder the flow of what God wants to do, so it's best to shut up and pray. She realized that her goal must not be to get her husband to do what she wanted but rather to release him to God so He can get him to do what He(God) wants.Always putting in mind that, there is a time to speak and a time not to speak and how happy our husbands would be if we could discern the difference. Prayer may not be able to stop a man from doing something he has desired to do but it can certainly diminish the voices of temptation and strengthened his resolve. She also remembered reading somewhere that while alcohol and drugs tempt certain people, others have a lust for money and power. Some even find food addiction, pornography or sexual immorality to be irresistible lures. Inasmuch as the bible implored us not to gratify the desires of the flesh, the enemy of our souls knows where our flesh is weakest and will put temptations in our paths at our most vulnerable points. In the cases of most men, sexual temptations were always so common.