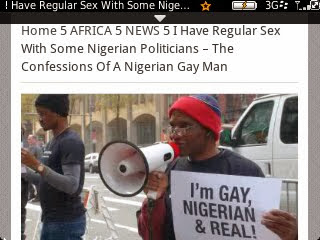 Hello friends! I really hope our weekend was great? And that you were able to get yourself a much needed rest before starting another working week? Hmmm. I really hope so. Knowing Lagos and we Lagosians…I really hope so! Lol!

Sequel to my last post, ‘Why I love homosexuals.’ I deem it necessary to devote today’s post to this topic before moving on to something else. With all the hullabaloos going on about it I just want to implore Nigerians, ‘Don’t get it twisted! Homosexuals are lovable people!’
Its with great alarm and distress I read about the purported stoning of gays in Bauchi, a northern state in Nigeria. In as much as I can’t quite fathom ‘Homosexuality’, I personally condemn this act of violence if it is happening in reality. I say this is absolutely barbaric! If you are a Christian like I am, you must agree that killing, stoning or showing hatred to them is not the ideal way of making them see reason or ‘the light’ as we often say. 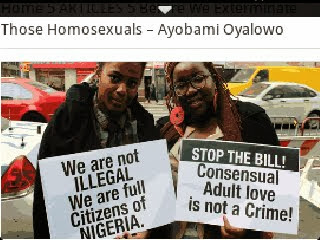 Recently, a twitter activist and journalist Zeenarh Mohammed came out in the open to declare that she is gay! Or should we say she meant lesbian? And you see comments from several quarters applauding her courage.
Tweets like : @Funmilola Brave, brave @xeenarh. Big hug and much love. Tweet from @omojuwa I don’t think anyone would doubt why I love @xeenarh & I don’t think anyone would expect me to love her less because of her personal choices. Tweet from @ayotolakeka I was really indifferent until I became friends with one three years ago. He’s awesome. His sexual orientation does not define him. Tweet from @omobobo:My favourite cousin is gay. I love her more than I love my own sister. Trust her even.

And yet another comment from an American mum: My daughter is lesbian, now I may not agree or like her lifestyle BUT, I love my daughter. I don’t believe God hates the person but rather He hates the sin. The Bible says it’s wrong for man&man or woman&woman to do that which is abnormal.
Considering all these comments and thinking deeply, we will have to agree that most of these homosexuals have great personalities and are lovable people! They actually believe they are who they are with no apology to anyone. They are absolutely sincere in their convictions!
But you know what? I don’t think sincerity is enough! Because we can actually be 100% SINCERELY MISTAKEN about our decisions and choices based on the information and influence we have been exposed to in our formative years!
I read and quote from an article, ‘In the modern world in which we live in, male and female sexuality have been flashed very powerfully and provocatively by the media on youth approaching puberty to the extent that mixed messages on sexuality are passed on to many youth who do not know how to handle the images they see and their response to them. The confusion that these images bring leads to tendencies being formed. If these tendencies are fed, they will grow stronger. If they are starved, they will grow weaker.’ Hmmm. Yet another tweet read,@Bellanwa: Parents have the responsibility to guide their children in ensuring they have healthy relationships.
Their sexual preference notwithstanding, I believe homosexuals deserve our love. I see a people living with deep hurt, rejection, confusion and only God knows what else. Though homosexuality still makes no sense to me, its so obvious that they sincerely believe ‘what’ or ‘who’ ‘they’ think they are! It is really true that ‘As a man thinketh so he is!’
Looking at nature ; plants and animals, I am yet to see ‘homosexuality’ being exhibited! Looking at the male and female private parts/reproductive organs, they have been made so it won’t be a case of a round peg in a square hole!
Looking at the natural process of reproduction, it takes the fusion of an egg/eggs from a female and a sperm from a male to bring about a new life! And yet, they too want to have children and are even now doing so through adoption!
Looking at the gender of the new beings produced, we have but male and female ;any other is an aberration from the norms!
Looking at the law of magnetism; opposite attracts!
To me, homosexuality makes no sense!

God forbid that my brother or sister open up to me as being a gay or lesbian. I definitely wouldn’t love him or her any lesser and neither would I cast the ‘first’ stone! Because there are so many other sins that we are not talking about and that each and everyone of us are guilty of! Let me make myself very clear here, though I personally reject homosexuality as a way of life but I have nothing against homosexuals.
I read this Tweet from @Ayourb recently and I have to agree that I share the same opinion too,
‘I am a complete heterosexual man and I can’t understand otherwise. But stoning, killing and jailing gays? How does it make us better?’