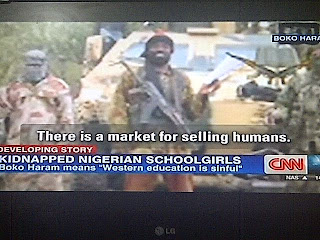 Words keep failing me! When I think of my nation Nigeria, I feel like giving up! I feel helpless! I feel incapacitated! And I know am not alone. Tonight I watched in dismay on CNN a video clip where the head of the Islamic Sect, Boko Haram claimed responsibility for the abduction of over 200 school girls. I watched, with the rest of the world, his taunts and ramblings as he threatened to sell off #OurGirls!I watched with a sinking heart as he stood boldly in front of a armoured personnel carrier taunting the rest of us even as Goliath had taunted the army of the living God! I, however, refuse to give in to fear and will implore you not to as well! I see lights at the end of the tunnel! Very soon, we shall all see it! I will rather continue to look unto God! He that defeated Goliath with the seemingly foolish sling in David's hand can and will surely do it again in our own generation. This too shall pass! Boko Haram will be a byword! Abubakar Shekau will be a of the past in the mighty name of Jesus! Today, I will be posting the concluding end of chapter 2 of my book #SecretAnguish. #Read, Rest and Relax.Chapter 2 continuedTina was highly disappointed. She wondered why she was, considering the person that introduced them in the first place.. She felt like telling him to stop the car immediately but an inner voice told her not to act hastily. She knew the Holy Spirit was trying to tell her something.
"Sir, may I call you Bro. Steve?"
"And why would you want to do that?" Steve was surprised; he wasn't sure what she was driving at.
" Well, I understand you used to be a Patron of the LVCU-Lagos Varsity Christian Union?" Tina didn't know why she was taking this line of conversation.Steve was speechless. He wasn't sure of what or how to answer. Remorse well up within him for the kind of life he has been living. Yes, he used to be the Patron of the said union but …. He slowed down the car and parked by the roadside. The conviction of his past sins overwhelmed him and he broke down completely. Tina was dumbfounded. She wondered what could have triggered this brokenness." I'm sorry if I said anything out of place but I believe the Lord wants to restore you back to himself."
It took some time before he could regain any semblance of composure. He found himself pouring out his heart to her. And that's how their friendship started. She discovered that Steve was a very thoughtful person and easy to talk to. In spite of their age difference, he could very well be the brother she never had and that's how she regarded him.In a very short while, they became almost inseparable. Before long, she expressed her desire to be introduced to his wife. She wanted to be certain of her welcome and especially to prevent any kind of scandal or misconception that might arise as a result of gossip. Although Steve thought this quite unnecessary, he however complied. He has found out that what they believed to be Tina's haughty attitude or high level of morality was actually an inner resolve not to be conformed to the standard of this present society.She finally got to meet his wife and found her to be a very pleasant woman. Initially, she was doubtful about befriending a married man but after meeting aunty Mary, she felt better. She discovered Steve and his wife have been believers for quite a number of years but the challenges of life have brought their marriage to a rut. The faith they have in common enamored the family to her the more.Since they worked in the same faculty, there was ample time to have lengthy discussions. She discovered they have a lot in common and understand each other perfectly. He told her his dreams, expectations and the sense of failure he constantly felt. They were never short of things to discuss. As time goes by, she noticed Steve wasn't as happy as he should be. She sensed it has to be with situation of things with his wife but as easy as it was talking with him, he never for once mentioned his wife. She didn't know how to broach the subject as well. This was a cause for concern. She didn't want to get involve in peoples' marital issues. But, it would be a pity if Steve could not enjoy his marriage no matter what the problem was. She had once read in a book that happy marriages begin when we marry whom we love and blossoms when we love the persons we are married to. Even though she was not yet married, she has began to understand that for love to continue to blossom in marriage, it would require a deliberate effort from both parties involved.She asked for God's wisdom in dealing with this issue. She believed God has an assignment for her in this family. The beep of her cell phone brought her back to the present. Watch out for chapter 3! Till then, let's continue with our appeal to our Government to #BringBackOurGirls even as we continue to confess that #OurGirlsAreOnTheirWay! Thank you!You can tweet at me via this handle @kemi_odutayo